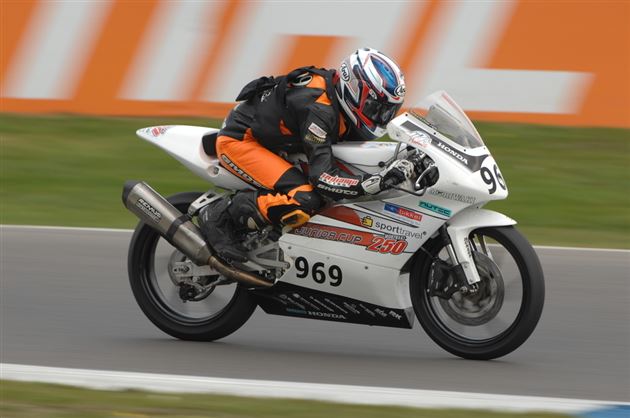 That’s all folks! I would like to thank everybody for a great season. I had my first full year of major events. At everyone of these major events, I found myself on the podium. I could not of done this without everyones help. We appreciate it!
Now, back to Assen. I would like to thank everybody that help me
get to assen and helped me get on the podium in race two. So thank you Glen at Team ProMotion, Scott Stump, & Mike Scott at Scott Powersports along with all my other great sponsors & family & of course Paulie! My weekend started off great I was in the top six in the first practice. First qualifier was a tricky one. I knew I had to go hard from the beginning since it was set to rain about 15 minutes in. We wound up only getting through three laps before the rain came in. I went out with Quentin Koers one of my good friends from Holland. We put in some pretty good laps for the only three laps. I wound up in second after the qualifying. I was also top three fastest in the rain!
Race one we had a battle till the finish. I battled with a group of kids for third place for the entire race. We had a good battle but they outsmarted me. Race two I got a really good start and got in a good rhythm. I put my head down and chased down the front pack. I caught them pretty easily and made my way through the pack but once at the front there was no way to breakaway. We had a long battle till the end but I rode smart and came out on top of the battle. The last few corners were crazy! Going in to the wide open left before the last chicane I put myself on the outside of someone to set them up for the chicane, but I just pinned it and passed them on the outside of the wide open left! So when we got to the chicane I was in front already. Then it was just a game of outbreaking. We were at least 4 wide going in but I was the latest on the breaks! It was such an awesome weekend! Thank you to Moriwaki 250 Junior Cup for the great racing this season!
After the races Paulie & I went to sightsee some of the places that Quentin told me to go visit while we were there. My favorite was just biking into the town & seeing the sights. Assen is an awesome place to visit & I can’t wait to go back! Thanks Quentin for being such a great friend!